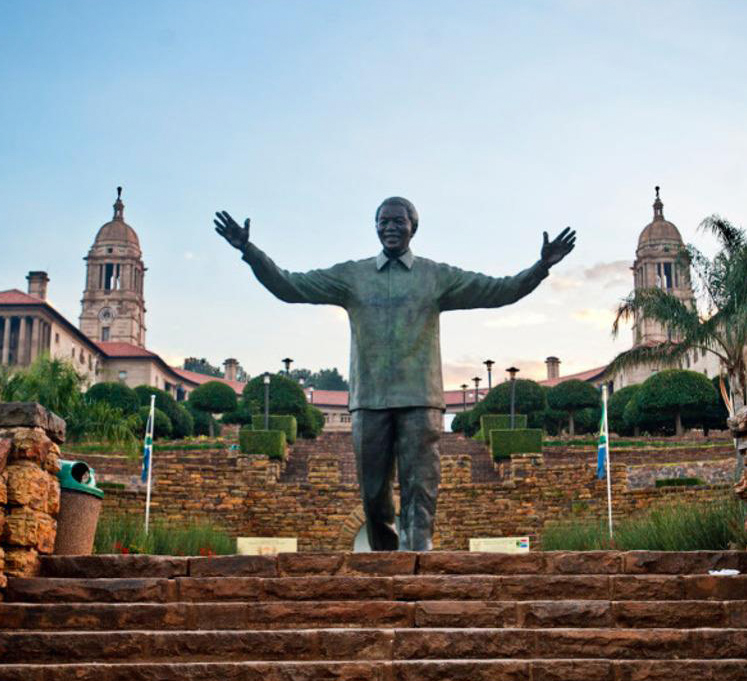 PRETORIA—South Africans’ hopes and dreams are well represented by the grand statue of Nelson Mandela which dominates the park below the Union Buildings, the seat of government. In a world where revolution so often is accompanied by repression and violence, as in Egypt and Syria, respectively, Mandela set aside decades of unjust imprisonment to lead his nation out of Apartheid’s horrid historical cul-de-sac.

Yet political reconciliation may have been easy compared to the challenge of more fully bringing those who suffered systematic discrimination and exclusion fully into the economic marketplace. Disparities in connections, education, geography, and wealth are not easily overcome. The poor typically are creative and entrepreneurial, but lack access to many of the essential tools of economic development.

In developing states financial systems, often government-controlled and usually elite-driven, are among the most difficult services for outsiders to access. Banks often reward influence more than enterprise. The rural poor are at a particular disadvantage since whatever economic infrastructure exists is concentrated in cities. McKinsey reported that worldwide some 2.5 billion people don’t use banks or other formal financial institutions. Landlines long were scarce and costly around much of the globe. Such difficulties are ever evident in Africa, home to some 1.2 billion people. After decades of economic stasis and even retreat, many African nations finally are moving forward. Nevertheless, years of hardship have left deep scars. Perhaps the continent’s greatest hope, beyond the resourcefulness and tenacity of Africa’s diverse peoples, is the commercial advance of technology.

For instance, mobile phones have taken communication services out of the hands of wealthy urban dwellers and empowered people who could only dream of getting a traditional land line. Instead of having to rely upon often corrupt, dilatory, and incompetent public enterprises—the frequent beneficiaries of domestic favors and foreign aid—people instantly gained the ability to communicate with others not just in their homeland, but around the world. Personal lives were enriched; business opportunities were multiplied. Now MyBucks, a FinTech (or financial technology) firm, is turning the smartphone into a portable bank. It’s an explosive growth area. Of course, existing financial enterprises have gone online. Incumbency gives them major advantages, including a large client base. But their web activities tend to be an extension of existing practices rather than transformation of standard products. It is "hard for traditional banks to change traditional operations," MyBucks CEO Dave van Niekerk told me: "When they launch digitally it is like two separate businesses." Unsurprisingly, reported a recent Economist Intelligence Unit survey of FinTech, "established banks generally still fail to create a good user experience." Yet consumers want not just a good but a better experience, particularly "service at their fingertips," explained EIU: "Today that type of service can be delivered via our smartphones, making it increasingly easy to breach the barriers between distribution and technology." Start-ups and new entrants are filling this need by providing new services and expanding the possible. Van Niekerk talked of "taking online banking to the next level."

Although some people call FinTech companies "disrupters," because they are disturbing the traditional market, van Niekerk prefers a more positive term. With MyBucks and other firms remaking the concept of financial services in the new century, he spoke of "game changers" and told me that "we really are more enablers here than disrupters."

Jens Munch, CEO and founder of PRIX, wrote that "The rise of FinTech has forever changed the way companies do business. The traditional model of a new business turning directly to its local high street bank and/or a conventional investor is no longer the only game in town." By 2023 FinTech firms are expected to account for 17 percent of banking revenue; given the pace of technological change, an even faster shift obviously is possible.

The gains are great for consumers, whether savers or borrowers. The new processes mean convenience for everyone. Noted Munch: "Whether it’s checking their online account or setting up an online investment portfolio, people now expect to handle financial affairs as easily and conveniently as they do their email or Facebook page." By both enhancing competition with existing banks and developing new ways to deliver traditional services, FinTech benefits existing banking consumers everywhere.

Even more important, especially for a continent like Africa, new technologies mean leapfrogging an existing model that has never served millions of people. Traditional banking for "so many people and so many small accounts" simply is not "economically viable," said van Niekerk. Many people of modest means, especially in poorer rural areas, have never had a checking account, possessed a credit or debit card, gotten a loan or mortgage, or even visited a bank. The potential market is huge, with those 2.5 billion people worldwide largely excluded from traditional financial markets. Also a couple hundred million businesses, perhaps half of small enterprises in the developing world, find growth limited by lack of access to credit and financial markets. Reaching just a few percent of these people and firms would create a vast new customer base and a profitable one if costs are kept low enough. Moreover, funding businesses would mean growing incomes and commercial activity—followed by increased demand for financial services. In the developing world, then, new technologies mean helping those previously locked out to access the financial system, perhaps for the first time. The services are cheap to provide and easy to use. They allow poorer nations to skip steps that had been thought essential in industrialized states. For instance, Tim Nuy, MyBucks Deputy CEO contended that "credit cards are not well-suited" to many transactions in Africa, but "mobile payments made credit cards irrelevant." MyBucks has taken this process a step further. By purchasing financial institutions from and partnering with Opportunity International, an NGO specializing in microfinance, MyBucks is mixing capitalism and philanthropy, seeking to financially empower those who long lacked access to financial services. Van Niekerk said his vision was "In the very near future, the poorest of the poor will use technology to educate themselves and access financial products and services, anywhere and at any time."